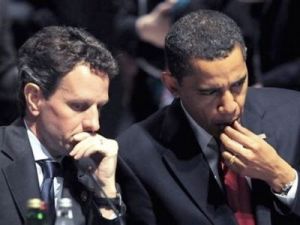 (Reuters) – The Treasury on Tuesday started dipping into federal pension funds in order to give the Obama administration more credit to pay government bills.

“I will be unable to invest fully” the federal employees retirement system fund beginning Tuesday, Treasury Secretary Timothy Geithner said in a letter to Democratic and Republican leaders in Congress.

The House of Representatives is expected to vote on Wednesday on the Obama administration’s request to raise the country’s legal debt limit to $16.394 trillion.

However, unless the lower chamber and the Senate are able to shore up enough votes to block the White House request, the debt limit will be increased by $1.2 trillion next Friday and a repeat of last year’s debt ceiling debacle will be averted.

Geithner said Treasury started suspending reinvestments in a federal pension fund known as the G-Fund — a tool Treasury has had to employ six times over the past 20 years in order to keep the country below the statutory debt limit.

The Treasury Department has already tapped another seldom-used fund in order to allow the government to continue borrowing without running afoul of the country’s laws.