Do Today’s Gas Prices Make You Feel Like the Economy is Improving? 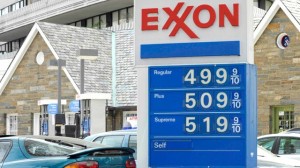 Does anyone else remember when everyone, including me, was complaining about the price of gas under President Bush?  Well, why are the only complaints we hear now coming from people like me?  There’s nothing from the media except excuses trying to take responsibility away from President Obama.  Even Obama was complaining back in 2008 when he was senator, blaming Bush and the big oil companies.  He’s now blaming speculators for the high prices the same way he blamed them in the 2008 presidential campaign.

According to the Washington Times he claimed that:

As president he would strengthen government oversight of energy traders he blames in large part for the skyrocketing price of oil.

The Democratic presidential candidate’s campaign singled out the so-called “Enron loophole” for allowing speculators to run up the cost of fuel by operating outside federal regulation.

Has he done anything about the speculators that he blamed then and is blaming now?

I’ve always felt that gas prices reflect what’s happening in our economy and in our country.  I remember the gas lines in the late 1970’s. You could only fill up on certain days, depending on if your license plate ended in an odd or even number.  I turned 18 at that time and even I could see the state of the economy because of the state of the gas lines.  People were cranky and felt the pain right in their wallets.   When gas prices got high under George W. Bush there was crankiness too.

President Carter was in an election year and as I remember Ronald Reagan won every state except Georgia.  Republicans aren’t licking their chops, as the president suggested when he mentioned during a speech in Florida Thursday that he read a headline in one newspaper that “Republicans are Licking Their Chops” over rising gas prices.  “Only in politics,” he added, “do people root for bad news.”

He goes on to mention that the American people are smart enough not to fall for Republicans bumper sticker slogan (You know: “Drill, baby, drill!”)

I don’t know any people who are ‘licking their chops’ about high gas prices.  Oh, I’m sure politicians will take advantage of it and although they may not wish for bad things to happen to the American people, why shouldn’t they use the utter incompetence of the current administration to help them during this election.  If the Republicans feel the reason for the problems in the country are because of President Obama’s poor leadership, why shouldn’t they use it to their advantage.  Senator Obama sure had no problem doing the same when he was running for president.  They all need to remember that the president was right about one thing.  The American people are smart.

Now as far as gas prices and the economy, an AP story printed in The Naples News says that:

Those higher prices could hurt consumer spending and unravel some of the recent improvements in the economy. And they could also be a daily reminder to voters to question Obama’s contention that he’s making the nation — and them — more secure.

While motorists are already starting to complain, many economists see the $4-a-gallon mark as a breaking point above which the economy starts to suffer real pain. Analysts estimate that every one-cent increase is roughly a $1.4 billon drain on the economy.

I’m pretty sure it will be a drain on my economy.

According to the Orlando Sentinel, the rise in gas prices will result in consumers spending more on gas and less on other things.  “You re-evaluate your life when you’re at the pump,” Anna Dieuveil, 26, of Orlando, told the Orlando Sentinel.  She said she expects to spend less money on going out to eat as she spends more money on gasoline.

As any driver knows, rising gas prices can put a dent in a household budget. For small business owners, it can hurt – or even wipe out – profits.

The recent rise in the price of gas is pressuring business owners to find ways to protect their earnings. Some of their strategies are simple, such as using GPS devices to track fuel usage. Others are drastic – like moving manufacturing operations to the U.S. from Asia.

Small business owners have navigated this road before – most recently in 2008 when the price of gas rose to a national average of $4.11 a gallon. But gas is expected to surpass that record and reach $4.25 by late April. And even if the price follows its usual pattern of gradually falling back from a high reached in the spring, it will still be expensive for the rest of the year.

Look, I get the argument about green energy and alternative fuels and I don’t want to get into the same details I got into with my son tonight about the same thing.  I just want to afford gas for my car.  I can’t afford to buy a hybrid or an electric car, no matter how much the government offers me in subsidies.  I see what’s happening in the Middle East and I want us to be oil independent.  I want to drill here and when we’re not afraid of where our oil is coming from and we can afford the cost of gas, groceries and the things that matter, then we can concentrate on finding a better way.

I don’t care about my carbon footprint.  I don’t really care what humans (might) be doing to the planet.  What I care about is just being able to take care of my family.  I want my kids to have the things they need.  I want to be able to afford to send them to college.  I want to look forward to a future where I can afford to drive to wherever my grand kids are and spoil them like crazy.

Remember, high gas prices make us cranky.  They’ve always made us cranky when they get higher and higher, especially when we’re paying more for food and clothing.  I’m pretty sure I’m going to vote for someone who gets it and isn’t so dead set on his own plan that isn’t really helpful for us now anyway.  We can’t wait more than a decade for relief.