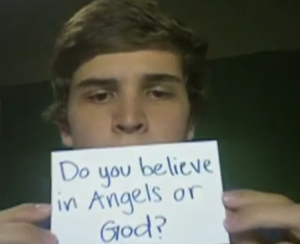 Glenn Beck Features Ben Breedlove’s YouTube Message on Life & God on GBTV | Video | TheBlaze.com This is an absolutely beautiful video and Billy Hallowell from The Blaze has written an awesome article about the video.  You MUST watch this video, but when you do, make sure you have lots of Kleenex and a quiet room.  This picture shows Ben Breedlove holding a card that asks “Do you believe in Angels or God?”  Well, I believe in both.  I also believe there are angels in heaven and on earth.  This boy is an Angel.  His smile makes me feel the love of God and I see the peaceful calm of someone who’s not afraid of death.  I have two sons, 17 & 19, but I’m pretty sure if I didn’t, this video would still make me cry.   Please read this article from The Blaze and watch the video.  The article also shows the original video that was posted to YouTube.  The original he posted in two parts, but GBTV with Glenn’s introduction shows the video all the way through.  But I warn you, have plenty of Kleenex.  I’m not kidding.  I woke up my husband with my sobbing. Here’s the article and the video:

GLENN BECK: THIS IS ‘ONE OF THE MOST POWERFUL GOD MESSAGES THAT I’VE EVER SEEN’

On his show last night, Glenn Beck shared a very special video message that was posted on YouTube last month by 18-year-old Ben Breedlove, a brave young man who died on Christmas day (just a few days after uploading it). Tragically, Breedlove suffered a heart attack after battling a lifelong condition called hypertrophic cardiomyopathy. (The Blaze originally did a post on the story last month: Did NBC Intentionally Edit Deceased Boy’s Admission That He Believed in God?) Beck went on to call the video, which has been viewed by more than six million people world-wide, “one of the most powerful God messages that I’ve ever seen.” The recording, which deals with both personal and spiritual themes, is moving to say the least.

“Very few people even know half the story of [Ben’s] life,” Beck said. “It is a remarkable story filled with hope and with love and with laughter and with grace and questioning. But in the end, it is a life full of miracles.”

He continued, discussing how Breedlove’s video is miraculously making an impact, while leading non-believers to God, across the globe:

“God is not sitting on the sidelines, but you have to be quiet enough and willing to see it and then stitch it all together. Someday soon, I hope to tell you the full story of Ben’s life and the message that he left that is now connecting with so many people around the world — especially young people — many of them who aren’t even religious at all. They‘re stumbling across this video as it’s passed from person to person and they are learning from Ben’s story that there is a God, that he is good, that miracles happen.”

Beck went on to share Breedlove’s video message in its entirety — something that many media outlets declined to do when initially reporting on this story last month. In fact, some media, as we’ve noted, actually left Breedlove’s references to God (what seems to be the main premise of his message) out of their coverage entirely. “This is a message that a young man received and then did exactly what he was supposed to do — share it with you — so you knew that [God] was involved,” Beck said. Watch Beck discuss Breedlove’s life and his inspirational video, below: Click this link to see the introduction and the entire video, or just watch the two part video also added at the end of this article. http://web.gbtv.com/shared/video/embed/embed.html?content_id=20073711&width=400&height=224&property=gbtv On Dec. 18, Breedlove posted the clip entitled, “This is my story” on one of his YouTube channels. In it, he shares his battle with hypertrophic cardiomyopathy, as he talks about three incidents during which he cheated death. The two-part video describes, through notecards he holds up (there is no audio), some of the visions he had during these life-threatening incidents. In describing his first experience cheating death at the age of four, Breedlove’s cards read:

There was this big bright light above me … I couldn’t make out what it was because it was so bright. I told my mom, ‘Look at the bright light’ and pointed up. She said she didn’t see anything. There were no lights on in this hall. I couldn’t take my eyes off it. And I couldn’t help but smile. I had no worries at all, like nothing else in the world mattered.

In describing his third incident cheating death, which occurred in Dec. 2011, Breedlove shares yet another heaven-like encounter. As medical professionals tried to revive him, he says he found himself in a silent, white room that had no walls. Breedlove goes on to say that he experienced “that same peaceful feeling I had when I was 4.” He continues:

I was wearing a really nice suit and, so was my fav rapper, Kid Cudi. […]

I then looked at myself in the mirror, I was proud of MYSELF, of my entire life, everything I have done. It was the BEST feeling. […]

I didn’t want to leave that place. I wish I NEVER woke up.

The clips culminate with Breedlove holding a card that says, “Do you believe in angels or god?” and another that proclaims, “I do.” And here’s the second portion: An inspiration, indeed. (H/T: GBTV)