***Updated – Is Sandra Fluke Working With the Obama Administration? 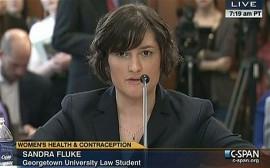 I was reading an article from Breitbart.com when I realized the same thing the author did.  Sandra Fluke has a plan.  She’s made herself a victim, when she is obviously no such thing.  Now I know many are coming out of the woodwork condemning Rush Limbaugh for his comments about Fluke being a “slut” and a “prostitute”.  His example was that if we pay someone for sex they’re a slut or a prostitute.  I don’t think he was necessarily calling Ms. Fluke a slut.  She was explaining to congress why she feels the American tax payers should pay for her contraception so she could have sex.

Let’s be honest, this has nothing to do with women’s health.  They want religious organizations to go against their beliefs and teachings to offer free contraception for their employees and students.  Look, if you want your insurance to cover contraception, or to supply it at no cost to you, work or go to school somewhere else.  I, as a taxpayer, don’t want to pay for anyone else’s birth control choices and therefore, their ability to have as much sex as they want.  If you don’t want to get pregnant, you could try just not having sex until you can afford your own contraception.

Now, as to the plan I believe Ms. Fluke has and I found in the following article.  Does anyone else think it’s strange that President Obama called Ms. Fluke in person to console her over big, bad Rush Limbaugh’s comments.  I didn’t think sitting president’s did that sort of thing.

Here’s the part of the article by LEE STRANAHAN I found particularly interesting:

However, Ms. Fluke pulled back the curtain midway through her interview on “The View” when she suggested that viewers head over to the website of Media Matters for America. As  The Daily Caller  recently exposed, there’s been a high level of coordination between the White House and Media Matters for America, so of course it’s no shock that Ms. Fluke chose MMFA as her leftist propaganda arm of choice.

One of Media Matters’s main jobs has been shutting down right wing media voices were ever possible. They want a world with no Breitbart.com, Fox News, Rush Limbaugh or any dissenting voices in the run-up to the 2012 election. The level of coordination should concern anyone because it’s the president using his position and bully pulpit as a way to quell criticism by utilizing the Institutional Left’s infrastructure.

Of course, The View is a perfectly fair and balanced source on the subject since they have Elizabeth Hasselback as their resident conservative. She had not heard Rush Limbaugh’s statements before viewing the heavily edited video clip shown  on The View but her gut reaction was “repulsed.”

I don’t know if you’ve read the series in The Daily Caller about Media Matters and their close association with the White House and MSNBC.  I read it and it makes a great case for MSNBC and the White House working together to bring down or silence President Obama’s critics.  It was amazing how far Media Matters for America (MMFA) was willing to go to bring down the administration’s perceived enemies.

The Daily Caller also talks about how after something showed up on MMFA, it was being used almost word for word on MSNBC by their various hosts.  Once it started on MSNBC daytime, by nighttime, they would be quoting it as fact.  In fact, they were stating it as fact on daytime too.

This is why when I first saw on all the blogs about Ms. Fluke suggesting people read MMFA, I was suspicious.  Is it a coincidence that she received the phone call from the President while waiting in the green room for her appearance on Andrea Mitchell’s show?  Andrea Mitchell finds any way she can to talk about the all-knowing, all-seeing President Obama.  She couldn’t wait to ask Ms. Fluke about her phone call from the President.

I wonder if any of the conservative women that liberal media have lambasted got a phone call.  Did anyone here about President Obama calling Laura Ingram after Ed Schultz called her a “right-wing slut”? (Check out Kirsten Powers’ article in The Daily Beast.)  In fact, the left has made an art form out of insulting conservative women.

Of course President Obama hasn’t called any of the women on the right who have been mercilessly berated and insulted by the left.  Some of the insults have been to vulgar and demeaning for me to even give them space here.  When it suits the president, would it surprise anyone to believe he might be coordinating with the likes of Ms. Fluke to control the message going out to the American people?  It certainly wouldn’t surprise me.

(Read the rest of the Breitbart article here.)

Is Obama using his daughters as an excuse for calling Sandra Fluke?  It sure looks like it.  As for his comments about this whole situation, I just don’t buy it.  Where were the phone calls from the president to conservative women who have been brutalized by the left when engaging in issues they care about?  I’m sure Bill Maher is waiting with bated breath for the president to return his $1m check and rebuke him for using remarks that have no place in the public discourse.  What about the other media personalities, i.e., Chris Matthews, Keith Olbermann, Ed Schultz to name a few, who have used misogynistic comments when referring to conservative women just engaging in issues they care about.

I can comment on the fact that all good folks can agree that the remarks that were made don’t have any place in the public discourse. And you know, the reason I called Ms. Fluke is because I thought about my daughters, and one of the things I want them to do as they get older is to engage in issues they care about, even ones I may not agree with them on. I want them to be able to speak their mind in a civil and thoughtful way… I do not want them attacked or called horrible names because they are being good citizens, and I wanted Sandra to know that I thought her parents should be proud of her, and that we want to send a message to all of our young people that being part of a democracy involves argument and disagreements and debate, and we want you to be engaged, and there’s a way to do it that doesn’t involve you being demeaned and insulted, particularly when you are a private citizen.