The Second Amendment clearly states, “The right of the people to keep and bear arms SHALL NOT BE INFRINGED!“

I hereby pledge to fight against your subversive scheme and uphold and defend the Constitution against all enemies, foreign and domestic.

Once Again, President Obama Only Tells Part of the Story

I’ve been thinking about these comments a lot in the last few days, and I gotta say, I think I get where he’s coming from but I think he’s only partially correct in his line of thought, let me expand on that.

Where he has some valid points: If you built a successful business then you needed the people who worked for you, who supplied your materials, who taught you your skills and business sense, who delivered your product, who built the roads and electrical lines and sewers that supported your business. All of the pieces that are required to run a successful business rely on the input of others to make it happen. Here he is right.

Other valid points: Yes, many people work hard, and yes many people are smart… so why are there more financially successful business people like I believe he’s trying to put down in this comment?

Two sets of factors: ones we have no control over and ones we do…

Factors We Don’t Control: Luck and Natural Opportunity … There is no doubt that some successful people can trace back to one or more events in their lives when luck was in their favor or life presented them with an opportunity that they jumped at. But there lies the key… “that they jumped at”.

Have you ever had the chance to invest your money in something, but didn’t feel good about it so you didn’t and then it took off? I had the opportunity early in my life to invest in Blockbuster Video and thought “eh, it’s just another video store” – WHO KNEW?!? Which leads me to our “Factors we do Control”.

Controlled Factors: Willingness to Take a Risk, Drive (or Desire if you will) and Gumption (Man-made Opportunity) – I submit here that you can look at the majority of financially successful people and look at their work ethics and you’ll see not just smarts and hard work, but also a drive to succeed, a desire to win, a willingness to take that risk to be successful (or fail miserably!) and the personal gumption to go out, knock on doors and create their own opportunities. Personal traits that should be REWARDED for those willing to take those risks and make their own opportunities.

I’m sorry President Obama, but once again we see you only looking at part of the picture and using that information to divide the populace further along classes.

You were supposed to be the president that could pull everyone together, but so much of what you do seems to be bent on alienation and partial facts.

It’s really sad if you stop to think about it.

So why didn’t they just show this in the beginning?  We knew all about President Bush’s college years and his single, drinking years, and his married years, etc…  Why is this President so secretive about his college years?

Check out this article at Breitbart.com:

The image above–never before released–is from public records at Columbia University that prove that Obama did, in fact, graduate in 1983 from the Ivy League school. Contrary to some conspiracy theories, Obama was a student within the Faculty of Arts and Sciences–not the less selective, “nontraditional” Columbia University School of General Studies (which only merged with the Faculty of Arts and Sciences in 1990).

This never-before-seen document debunks a persistent myth that is unfairly unfavorable to the President.

Some “fact-checking” websites–such as snopes.com andFactCheck.org–have attempted to debunk the “Obama never graduated Columbia” conspiracy theory before. Yet they have relied almost entirely on secondary sources and mainstream media reports, which fail to cite primary sources. And the Obama campaign has not provided details of his admission to, or graduation from, the prestigious Ivy League school.

Crucially, Obama has refused to release his college transcripts from Columbia and Occidental College, which certainly do exist. Other candidates–such as George W. Bush–released their transcripts, though their grades were not necessarily flattering.

Read the rest at Breitbart.com.

Does it bother anybody else that President Obama “quoted” two republicans in the last week in such a way as to draw ire by not actually quoting what they said but by actually paraphrasing what one person said and calling it a “quote”, and by quoting the other out of context?

Earlier this week during a speech at the University of North Carolina, Mr. Obama said:

“I’m going to quote this because I know you guys will think I’m making it up, she (Rep. Virginia Foxx (R-N.C.)) said she had ‘very little tolerance for people who tell me they graduate with debt because there’s no reason for that.’”

Which would be outrageous, except it’s not quite what she said.

For whatever reason, President Obama chose to leave out a couple of key words in his “quote” (making it a paraphrase, not a quote as he stated) because what she actually said while on the G. Gordon Liddy radio show was that she had “very little tolerance for people who tell me that they graduate with $200,000 of debt or even $80,000 of debt because there’s no reason for that”.

It looks to me like she was saying you could choose a lower cost education and not graduate with $200K in debt if you chose to (nobody MADE you go to an ivy league college just because they accepted you), not that she thought graduating with ANY debt was bad.

In that interview she goes on to say that she reminds people that the Declaration of Independence promises life, liberty and the pursuit of happiness — stressing the word “pursuit.”  Adding that “You don’t sit on your butt and have it dumped in your lap”  Amen, sister!

Then at the University of Iowa, Obama said, “You’ve got one member of Congress who compared these student loans — I’m not kidding here — to a ‘stage-three cancer of socialism’”.

Now, even though the president didn’t name him by name, this comment can be traced back to a comment made by Congressman Todd Akin, Missouri, in a recent debate with Republican senate candidates. When asked about the student loan issue, Akin slammed the government for taking over college loans in a 2009 bill.

“America has got the equivalent of stage 3 cancer of socialism because the federal government is tampering in all kinds of stuff it has no businesses tampering in,” he said.

So it appears his comment about “stage 3 cancer of socialism” is NOT about student loans, per se, but about the government taking over the student loan program as part of a number of national debt increasing moves instead of leaving it in the hands of the financial institutes better suited to handle financial matters.

I’m sorry, but if you are going to “quote” somebody, it’s supposed to be word for word, and hopefully in context, not mostly what they said, reworded in a way to fit your agenda.

COME ON ALREADY, I AM CALLING SHENANIGANS HERE!

Obama: I Can Do Every Job Better Than Those I Hire to Do It – By Jim Geraghty – The Campaign Spot – National Review Online 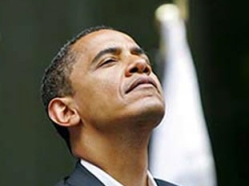 Obama: I Can Do Every Job Better Than Those I Hire to Do It – By Jim Geraghty – The Campaign Spot – National Review Online

Wow, we obviously didn’t know he was the smartest man ever!  Does the word narcissist come to anyone else’s mind?  Check out what it says at the National Review Online:

It appears one of the great challenges that President Obama has had to overcome in office is that no one around him is as good at his job as he is.

From Jodi Kantor’s The Obamas, page 66:

Obama had always had a high estimation of his ability to cast and run his operation. When David Plouffe, his campaign manager, first interviewed for a job with him in 2006, the senator gave him a warning: “I think I could probably do every job on the campaign better than the people I’ll hire to do it,” he said. “It’s hard to give up control when that’s all I’ve known.” Obama said nearly the same thing to Patrick Gaspard, whom he hired to be the campaign’s political director. “I think I’m a better speechwriter than my speechwriters,” Obama told him. “I know more about policies on any particular issue than my policy directors. And I’ll tell you right now that I’m gonna think I’m a better political director than my political director.”

This is not some long-ago sentiment, or momentary lapse into egoism. Michelle Obama declared at a Democrat party fundraiser in California last June:

“He reads every word, every memo, so he is better prepared than the people briefing him,” she said. “This man doesn’t take a day off.”

I first found this story at Weasel Zippers.  Be sure and check it out.

President Obama and his wife, Michele, gave a total of $48,000 in tax-free gifts to their daughters, according to tax records made public on Friday.

The president and his wife separately gave each daughter a $12,000 gift under a section of the federal tax code that exempts such donations from federal taxes.

There is nothing illegal about the president’s taking advantage of this tax shelter, but it does raise eyebrows given that he has lamented the myriad tax exemptions used by the wealthy—“millionaires and billionaires” like himself—to pay less in taxes. He has yet to propose a comprehensive plan to reform the byzantine tax code.

This is too funny and awesome not to share.

“The Road We’ve Traveled” video? (aka “Why I’m the Greatest President Ever…”)

BWAA HAAA HAAAA – Oh geez politicians are such LIARS! And they must think we all have no memory because they keep trying to get away with it!

Have you seen President Obama’s new “The Road We’ve Traveled” video? (aka “Why I’m the Greatest President Ever…”) In it Tom Hanks (yes, THAT Tom Hanks) says:

“Not since the days of Franklin Roosevelt had so much fallen on the shoulders of one president. Now when he faced his country who looked to him for answers, he would not dwell in blame or dream in idealism.”

And he says it with all sincerity too!

WHAT THE @#%&?!? How many times have we heard Mr. Obama say “I inherited…” or “Bush’s fault…” or some variance of those statements in the last three years? TOO MANY TO COUNT to my thinking! But “he would not dwell in blame” – BULL$HIT! DON’T LIE TO US! If we like you and what you’ve done, we’ll vote for you; if we don’t, we won’t! Simple as that… BUT QUIT BULL$HITTING US! WE DESERVE BETTER FROM YOU AS OUR LEADER!

And even though Hanks says it, Obama’s re-election campaign is behind this thing and happily gloss over all the bad stuff while high-lighting the stuff their proud of.

Why isn’t there ANYBODY running for president this year I can get behind and honestly support whole heartedly?

WE DESERVE BETTER DAMN IT!!!