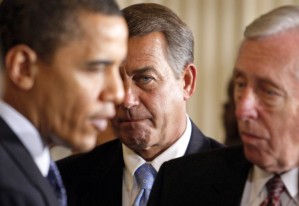 WASHINGTON (The Blaze/AP) — The GOP-controlled House on Wednesday kicked off another session with a protest vote against raising the government’s borrowing cap by $1.2 trillion, but the maneuver amounted to political theater under a process stacked on purpose in President Barack Obama’s favor.

The nearly party-line 239-176 vote puts the House on record against Obama’s use of unprecedented authority – awarded to him through a mechanism devised by the Senate’s top Republican – to unilaterally raise the so-called debt limit unless Congress can muster the votes to block him.

The Senate is sure to kill the measure next week, and Obama‘s veto power serves as a final guarantee that the increase will go through as intended and that the nation won’t face another debt crisis like last summer.

The political dance choreographed under last summer’s Budget Control Act was designed to permit lawmakers, mostly Republicans, to vote against debt increases but not actually block them – and provoke a first-ever, market-rattling default on U.S. government obligations.

The debate offered tea party-backed GOP freshmen an almost three-hour opportunity before C-Span cameras to cast blame on the White House and Democratically controlled Senate for the nation’s fiscal ills. The national debt has skyrocketed during Obama’s first term – from $10.6 trillion on Inauguration Day to $15.2 trillion today.

END_OF_DOCUMENT_TOKEN_TO_BE_REPLACED

What if each household handled their debt the way the government handles theirs?

What if each household handled their debt the way the government handles theirs?
I’m guessing this video was made around the time of the “Great Debt Ceiling Debate”, but I think it still applies now. The government is still doing this type of thing with our money. How long are we going to take this? How long are we going to let the Republicans play their games and give in. It’s time to vote out anyone who has chosen to still play this game with our money.

Here’s a video that shows how this would look if it was you or me handling our money this way. It’s definitely worth watching.

I do believe this is the same guy who said he was afraid Guam would tip over if we put more military there.  I’m sorry…he barely seems like a real person to me.  I’m in the Tea Party and I’m pretty sure I’ve never conspired to dismantle the government.  I’m pretty sure I’m not an extremist or terrorist either.  I don’t try to keep the rich from paying their fair share of taxes because I think most of the rich already pay more than their fair share.  Oh yeah…when have you ever gotten a job from a poor person.  All my jobs were given to me by people who could afford to employ many Americans in our country.
Oh…I forgot…I’m conspiring to dismantle the government and I must support those other conspirator Tea Party extremists in Washington who are obviously holding all these morons hostage.
Unbelievable!!

She is such a freak and a liar!  Most of the things she says are just straight up lies.  Even the sight of her sickens me.

EXCLUSIVE: What Boehner said to the caucus – Right Turn – The Washington Post

EXCLUSIVE: What Boehner said to the caucus – Right Turn – The Washington Post.

I hope Boehner sticks to his guns.  The Dems haven’t put forth a budget or any plan except to raise taxes and raise the debt ceiling.  I guess the Dems don’t realize, even the rich only have so much money.  And if they give more, they have nothing to expand and create jobs.  Why can’t Washington realize this.  I care where my money goes.